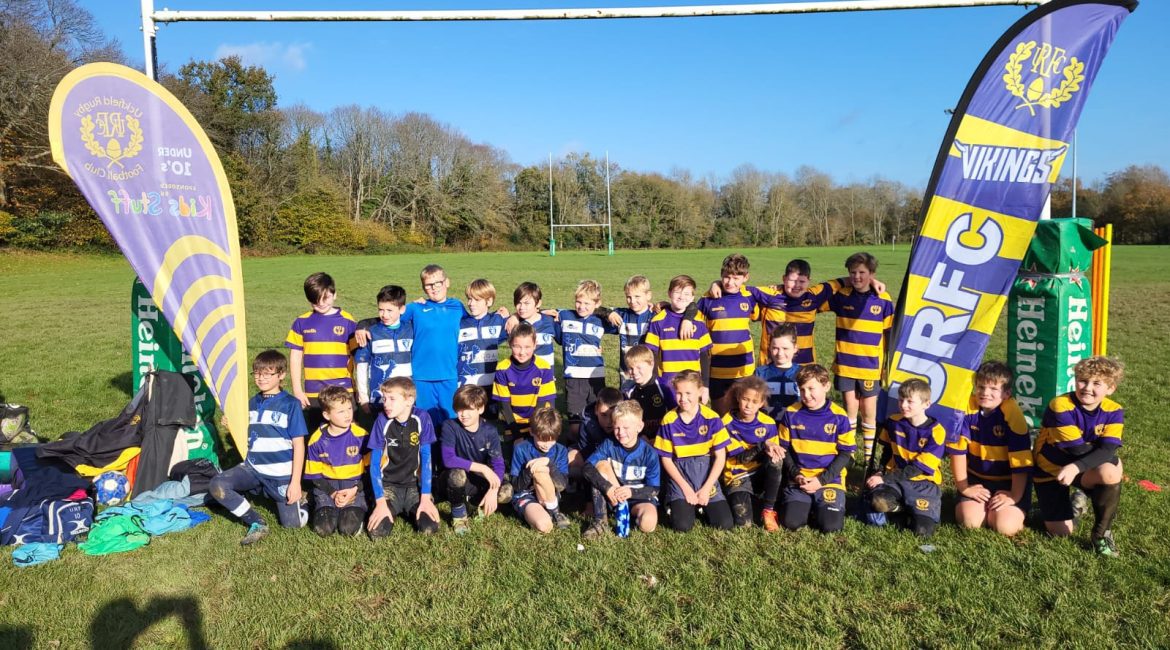 Uckfield U10’s welcomed Lewes U10’s for our first ever non-festival fixture. By happy coincidence it was also Lewes’ first friendly, too.

The day started off with two groups of players hesitant to mix with other. Once all the expected players had arrived, we started with a simple Activate warm up. To encourage mixing the coaching team asked players from each club to lead any favourite warm up exercise. We ended up with about five from each club demonstrating to the group and a more confident group.

We split into two groups for a little bit of skill development work, concentrating on tackling, rucking and general breakdown play. One group, led by Uckfield U10’s head coach Paul doing a simple, then slightly modified, tackle tunnel. Working on tackle technique, presenting the ball and eventually contesting the breakdown by rucking or stealing the ball. The other group played a variation of Rugby netball, led by Uckfield U10s assistant coaches Blake and Michael. Using different sized and shaped balls to improve general handling and adding a call of “Player tackled” to then form a ruck for possession. The groups were swapped over after a few minutes, so all the players got to experience both drills.

Finally, the clubs separated to play a match. As Lewes had a few players less than Uckfield the coaches asked for two volunteers to play for Lewes and those two players, William and Thandie, deserve special mention for volunteering even though it was their first proper club match. William even managed to score a try against his regular teammates!!

The match was played in excellent spirit with both sets of players really putting what they had learned earlier in the session into practice. There was also some lovely offloading and even some time for flashes of individual brilliance, from both teams. It was a really even game finishing 3-3.

The players then posed for parents to grab some photos of the mixed group followed by burger and chips provided by the club. From the feedback I have received from parents from both clubs the morning was thoroughly enjoyed.

From my perspective, as the Uckfield U10’s head coach it was lovely to have to groups so evenly matched playing together.

I would like to give a special thank you to Charles, the Uckfield U10’s manager, for doing the organising and making the fixture happen. I also want to thank the club for providing food after the session to allow me to show the group one of the best things about our sport – we play hard against each other, but we sit down with our opponents and make rivalries and friendships which can last as long as we play the sport. But most of all giving my U10’s a memory that will last a very long time.

Finally,thanks to Lewes for coming up and we look forward to seeing you in the return fixture and, of course, at future festivals.

Permission was sought for pictures taken; however, if you have any concerns or issues please get in contact – hello@uckfieldrugby.uk